I currently have a few horses that are really learning to use themselves. They are all suffering from PSSM, which has certainly contributed to their fundamental lack of balance and awareness of where to put their feet. Since I am sure I am not alone in having horses like this that just need a little bit more help to use them selves well I figured I would write a blog about it. 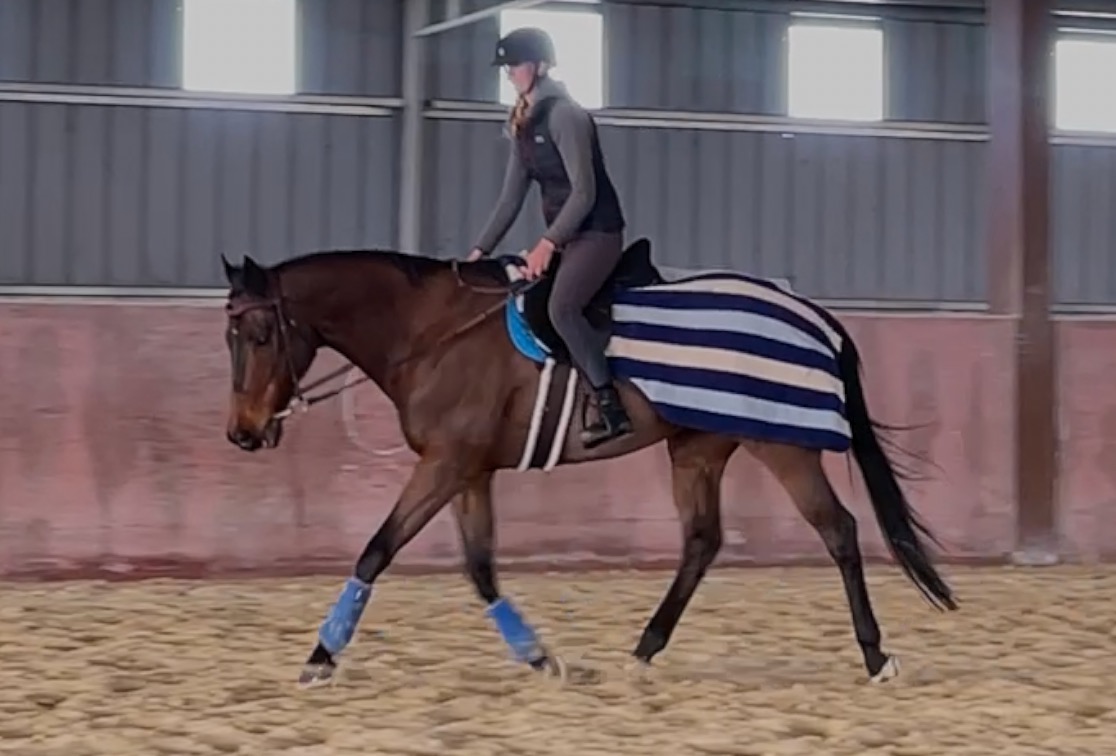 Traditionally when teaching a horse to use himself I will begin by asking him to reach forward and extend through his body until he is using his whole self. Generally that will look like asking the horse to move really forward and introducing some small bends and turns to help engage the hind end. Once the hind end gets engaged I would push forward again asking the horse to step through his hind end and back every stride. Once the horse is able to do that I would then start asking the horse to half halt while keeping that same level of engagement. Eventually that would build into collection and laterals would be added in until the horse was carrying himself well and was easily maneuverable.

Unfortunately with these horses that was not a good approach. Pushing them forward made them anxious and worried that they would trip and fall. These horses needed a little bit more handholding to figure out how they could be forward and stay in control of their bodies. Further challenging the situation they all had some trauma around being held too get her. Because of the PSSM in the past they were unable to do what was asked of them and were pushed into contact that they were physically unable to maintain.

Teaching them how to use themselves meant I had to be able to support them and show them where to put their feet without them ever feeling trapped or held. The first step was to teach them to trust my hands. To do this I allowed them to be slow and sucked back. The forward would give them anxiety since they didn’t have balance yet and that wasn’t the point. I asked them to make small bends from the rein where they engaged the inside hind and softened to the bridle. If they sucked back I allowed it and ignored it. Once they softened to the rein and engage the hind end I gave a big release to show them my hands were safe. I wasn’t going to hold onto them and take control if they offered me softness. We did this at the walk and trot. With some of the horses I did it at a canter, but not all. All of them were sucked back and out behind in this work.

Step two was to show them that my outside rein was just as safe as my inside rein. I did the same exercise as before and added a little bit of contact with the outside rein. I used the outside rein to half halt as I asked them to step their inside hind over. As soon as they did and they softened to both reins I gave a big release. We did this over and over again until they began to appreciate the outside rein as a helpful tool to remind them what the outside shoulder should be doing. It gave them stability and more direction in what they were being asked. Because these horses didn’t have good natural balance they quickly learned to appreciate the help in maneuvering their bodies. I was careful to always give big releases that allowed them to stretch down and find lift through their backs. It also helped remind them that I wasn’t going to take advantage of their softness. I was going to be equally soft back. We did this at the walk, trot, and canter.

With both reins introduced we were halfway there. Now I needed to start encouraging them to step more forward and engage their hind ends to push instead of just yielding. I added to the previous exercise by giving a smaller release as we left the turn. Initially the horses thought to suck back when I gave a small release and held the contact. I gently encourage them to maintain their slow forward movement and they learned to be comfortable with the contact.

Once I could reliably pick up a contact by yielding the inside hind and half halting the outside shoulder I could ask for more push from the hind end. I began to ask them to push forward out of their turns. The turns became a way to balance them and engage the hind end and they learned to keep the hind end engaged and drive forward out of the turns. This gave us some moments of collection, but as we went straight they would lose the energy and begin to hollow out.

For a while I made turns to balance them and re-engage the hind every time they started to lose it. When that got more consistent I started asking them for more forward on the straights. I kept a consistent contact when asking for the forward and then gave a release with my hand as they stepped forward to allow them to stretch down. I knew they weren’t ready to step into the contact yet. Instead I was working on the thoroughness that with most horses I would have started with.

We kept working on a combination of engaging bathe hind end in turns and pushing the horse forward on the straight into the stretch. Slowly we developed the ability to stretch at the walk, trot, and canter with an engaged hind end and through back. In other words we developed thoroughness.

Now I am working on developing further collection with these horses. They have the idea, but they don’t have enough strength and power through their hind end and backs to truly collect. I will keep building their forward in their stretch and using small bends and turns to rebalance them and engage their hound ends. We have also been playing with laterals to further supple them and use their bodies better. Although they all still have trauma around losing their balance and being held they are learning that their rider is there to help them. My hope is that eventually they will become confident in their bodies and be able to do it all on their own. They are quite a ways from that though. I am just happy that I am able to give them the confidence in their bodies that the PSSM took away from them.

The half halt is one of the simplest, yet least understood concepts in riding. In very basic terms the half half is half of a halt. A halt is performed by the horse rocking back Read more…

Good Turns and Why They Elude People

I have a lot of students currently that have trouble steering. And this has been an issue the majority of my students have struggled with at one point or another. I could blame it on Read more…

Top 3 Exercises to Finding Connection in the Saddle