Recently I’ve been riding bitless a lot. After years of riding only in bits it was quite the change. Most of my horses had some foundational work in a halter and all of them have hacked in halters, but I always left serious riding to be done in a bitted bridle. Riding in a halter was normally reserved to when I was too lazy to properly tack up or the horse was too green to understand a bridle.

However in the last 6 months I have been experimenting with all of my horses in bitless bridles. It all started with my horse London that has always been hyper sensitive to the bit. I found that riding him brideless allowed me a truer and more consistent stretch than with a bridle. As much as I worked on the bridle with him he never lost the habit of chomping on the bit, fussing, ducking behind, and being inconsistent in his stretch. I was curious to see if a bitless bridle would fix the problem since he was so steady walking around the property with his halter and riding bridleless. My thought was if I could pinpoint the issue I could more easily address it. The first step was to pick a bitless option to try. 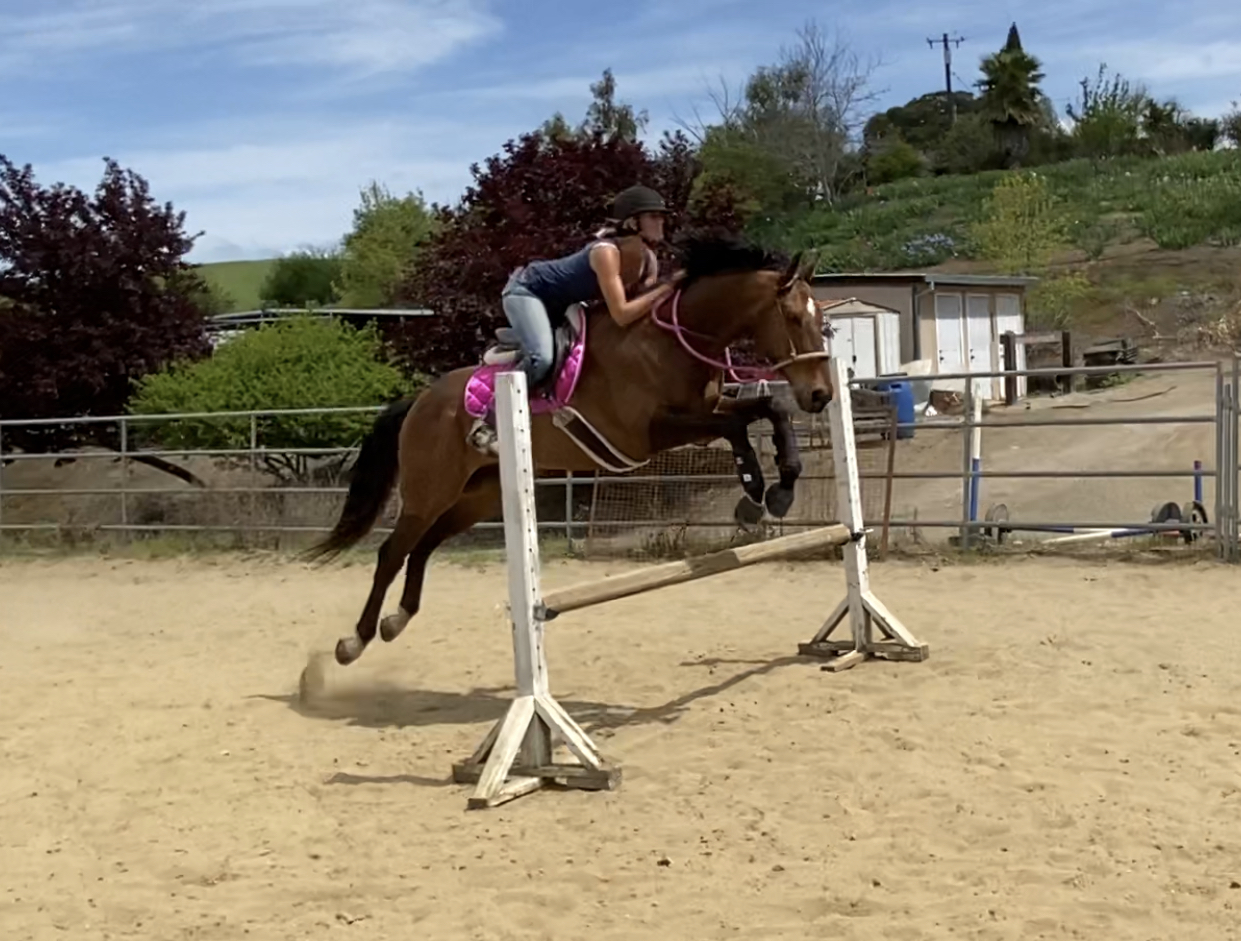 I still don’t love most hackamores as I think the common leverage component makes no sense. I almost exclusively ride in snaffles, so going from a snaffle to a leverage hackamore seems like a huge step up and defeats the purpose, which was to put less pressure on.

I also dislike bridles such as the Dr. Cook’s bridle that is a modified side pull that crosses under the chin. As pressure is applied to the rein it pushes against the underside of the horse’s jaw and pulls sideways. How is that supposed to help my horse stretch into a contact???

For my bitless endeavors I started out with a standard rope halter with a set of English reins. It was simple, easy, and I had some limited experience riding in it. This had its advantages as my horses that tended to overreact to the bit and duck behind were able to feel safer in the contact. It allowed me to be less hyper sensitive so that a slight stiffening in my shoulder wasn’t causing my horse to brace and duck. That made for a much easier ride!

The disadvantage I found was that lateral flexion became more difficult. The horses didn’t seem confident whether I wanted a bend or a halt. This made actual collection very hard because I struggled to get the horses to bend around a circle and give through their necks. If I stuck to a straight line it was great, otherwise we suffered.

I figured the problem with the halter was there isn’t a ton of communication. If you are big about taking your reins out to the side the horse understands, but backward pressure feels the same on both sides. Therefore this wasn’t suitable for the more advanced work I wanted to do.

I ended up trying a friend’s bosal while she was on vacation and that was a game changer. The bosal has more rigidity to it, which allows more precise communication. If both reins are taught you still have a lack of clarity with lateral bending, but if you rely on the weight of the heavier reins for your contact you have complete sensitivity. My horses could feel me closing my fingers on one rein, which allowed us real communication in our collected work.

Riding in the bosal I did notice that my horses tended to be a bit heavier than in a bridle. My horses that ducked under the bit were putting just the right amount of weight in it and my horses that were great in a bridle took a few rides to soften. I’ve heard that a bosal can be harsher than a snaffle, which might be true, but I think it is softer with soft hands, which is what I was looking for.

Universally all my horses were more consistent in the contact with a bosal over a double jointed loose ring snaffle. There was no head lift when I used a rein or ducking when I half halted. I was able to easily achieve a normal collected frame with a slight loop in the rein since a bosal is easier to ride off the weight of the rein than direct contact. Overall it was a huge success!

My horse that got strong to fences even jumped without grabbing my reins in the bosal, which made him way more rideable. He is now permanently in a bosal. I tried him back in the bit twice now and both times I felt like I was back on the disaster I had had before the bosal. He was overly sensitive, rushing, and nervous anytime I used a rein even if it was just closing my fingers while riding on the buckle.

Now that I have more experience with bitless options I can definitely say it will stay in my arsenal of tools. I am still not a bitless fanatic that thinks every horse should go bitless, but I think it is a great alternative to a snaffle. I suspect I will be riding a lot more of mine in a bosal and using the bridle as a finishing touch for shows that don’t allow hackamores. I think bitless options allow you to use more familiar and less offensive pressures on the horse, which makes training and riding much easier. After all, half our job is to make it easy on the horse and to ensure that he is a willing participant!

Last week I wrote about forcing horses to comply to our demands. If you didn’t see that article, check it out here. What was interesting to me is the conversations that article brought up. It Read more…

The Rhetoric of Making or Forcing a Horse

In the last several weeks this has been coming up for me more and more and it’s starting to really bother me so I figured it would be a good topic for a blog post. Read more…

Goals versus Plans: Riding in the Moment

My lessons last weekend really got me thinking, and it took me a bit to organize my thoughts into words. My weekend students are wonderful, caring riders, but they were struggling with my basic approach Read more…